The process of selecting a corridor can be thought of as an inverted pyramid. Starting broadly with the entire state, we focused on a likely region, narrowed it down to a Caltrans district, and identified a corridor within that district. 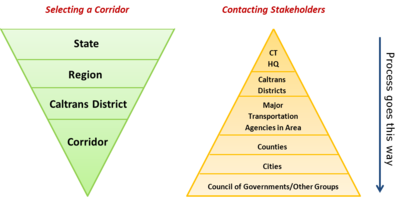 In contrast, the process of contacting stakeholders took the shape of an upright pyramid, starting with Caltrans Headquarters and expanding to include more stakeholders as the project focused in on a specific corridor. In addition to Caltrans Headquarters and districts, we contacted the predominant transportation agency in the area we were interested in, the Los Angeles County Metropolitan Transportation Authority (LA Metro). As a regional agency, Metro was instrumental in helping identify a potential corridor to study. Further contacts included the counties in the area and the cities along the corridor.