Deciding on a Corridor

Deciding on a corridor to study for the Connected Corridors project involved:

We needed to identify which region of the state, which Caltrans district, and ultimately which corridor the project would focus on. To do so, we initially consulted with Caltrans Headquarters, our sponsoring partner on the project. Of the four major metropolitan areas in California – Sacramento, the San Francisco Bay Area, Los Angeles, and San Diego – it was decided to concentrate on the LA area. In addition to its well-known congested freeways, LA seemed like a suitable choice because it had other characteristics we were looking for:

We began gathering basic data on the LA region to identify potential transportation corridors that contain, at a minimum, a freeway and parallel arterial. The map shows what we considered: 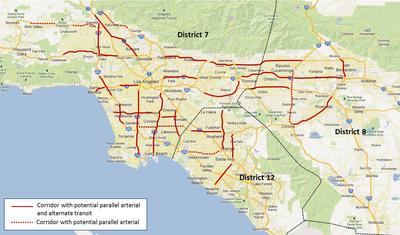 We also began compiling statistics from the corridors in Caltrans districts 7, 8, and 12. We wanted a fuller and more quantified picture of their transportation characteristics, in order to consider several alternative corridors. Click the picture below to see a spreadsheet of the kinds of data we gathered:

After reviewing our preliminary data, we again consulted with Caltrans Headquarters, who also polled the Operations Division chiefs in the LA Caltrans districts to see if they had suggestions for a particular corridor. We also spoke with the largest transportation agency in the LA area, the Los Angeles County Metropolitan Transportation Authority (Metro). From these discussions, it was decided to focus on Caltrans District 7 and, within that district, on the I-710 freeway (at least initially). The I-710 seemed like a viable candidate because, in addition to having the basic attributes of a corridor, it was heavily traveled by large volumes of both public and commercial traffic, experienced serious congestion, and presented a challenging problem where much could be learned and potentially improved.

We began investigating I-710 in greater detail to assess its suitability for an ICM pilot. This three-month analysis involved examining:

Like any potential corridor, I-710 exhibited advantages and disadvantages for an ICM project, and the purpose of our detailed evaluation was to reveal them. This enabled us to consider any areas of concern and see how they could be mitigated.

Click the pictures below to see our evaluation results:

Based on the detailed evaluation and the areas of concern, we ultimately decided, in consultation with our project partners, that the I-710 corridor was not the best choice for the project. Among the key issues were:

While the corridor had many positive characteristics, those were outweighed by concerns which could not, finally, be realistically mitigated. We therefore turned to considering alternatives.