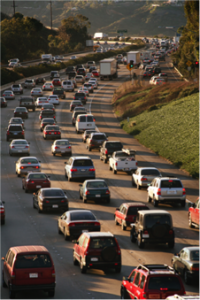 California is a dynamic state that continues to be a leader in many important areas, including agricultural production, innovative technology, miles of highways—and traffic congestion. According to the California Department of Transportation's Mobility Report for 2013, Californians lost over 100 million hours because of congestion. Los Angeles County has six of the top ten most congested highways in the state, with Interstate 210 ranking ninth overall. The state exemplifies many of the problems of transportation systems around the world: It is an energetic economy with a transportation infrastructure less and less able to deliver the mobility and accessibility California needs.

In the past, government agencies would have addressed the problem of urban congestion by widening highways and building new roads, tunnels, and bridges. Over the last decade, however, it has become increasingly clear that this approach can no longer keep pace with the state’s demand; the costs are too high and the negative impact on the environment and on the livability of communities socially and politically unacceptable. Due to these constraints, the emphasis has now shifted from building new infrastructure to efficiently using what has already been built. What does this mean?