Macroscopic simulation models are based on the deterministic relationships of the flow, speed, and density of the traffic stream. The simulation in a macroscopic model takes place on a section-by-section basis, treating traffic flow as a fluid rather than by tracking individual vehicles. Macroscopic models have considerably fewer data and computer requirements than microscopic models. They can simulate certain control strategies in large networks.  However, they cannot model transportation improvements that affect the operational performance of individual vehicles (e.g., geometric improvements on intersections and ramps).  Examples of operational macroscopic models for I-210 include the FREQ model and the TOPL model, based on cell transmission (CTM).  The following figure shows typical output of the TOPL model for a 14-mile section of the I-210 freeway: 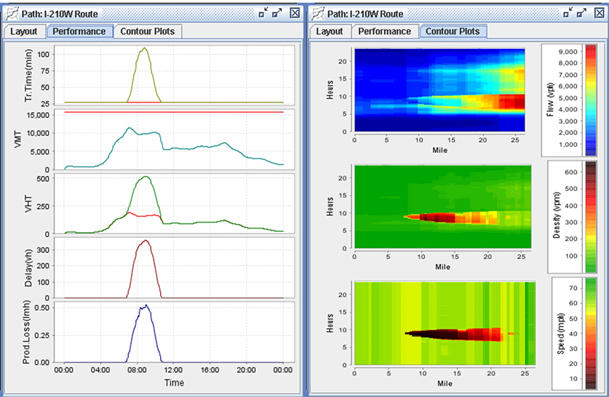 These models simulate the movement and interactions of individual vehicles based on car-following, lane-changing, and queue discharge algorithms. Typically, vehicles enter a transportation network using a statistical distribution of arrivals (a stochastic process) and are tracked through the network each second (or fraction of a second). Typically, upon entry, each vehicle is assigned a destination, a vehicle type, and a driver type. In many microscopic simulation models, the vehicle operating characteristics are influenced by design features (e.g., vertical grade, horizontal curvature, and superelevation), based on relationships developed in prior research. The primary means of calibrating and validating microscopic simulation models is through the adjustment of driver sensitivity factors. Computer time and storage requirements for microscopic models are fairly large, usually limiting the network size, the number of vehicles to be simulated, and the number of simulation runs that could be performed. Because of the detailed representation of the traffic network found in these models and because of their ability to model traffic control strategies (such as ramp metering or traffic signal pre-emption), these tools are well suited for modeling ICM strategies such as accommodating/promoting cross-network diversions. The Aimsun product of TSS includes microscopic simulation capabilities. Examples of microscopic simulation models in the I-210 corridor are the VISSIM model of the I-210 freeway and the VISSIM Pasadena model consisting of the I-210 freeway in the Pasadena area and 190 signalized intersections.

Mesoscopic models combine the properties of both microscopic and macroscopic simulation models. They track individual vehicles, but their movement is based on the deterministic speed-flow relationships as in the macroscopic models.  Mesoscopic models are appropriate for assessing traveler information and guidance strategies because they consider the queue formation and dissipation on the network links.  As such, they include dynamic assignment algorithms (DTA) and can evaluate dynamic traveler diversions in large-scale networks. Examples of mesoscopic simulation models include the Aimsun product of TSS, as well as Dynasmart-P, Dynasim, and Dynameq. There are no operational mesoscopic models for the I-210 corridor.