PATH has created a software application to assist stakeholders and engineers in capturing this information and then testing the generation of response plans for a given incident. All of the elements that make up a response plan are being added to the tool. These include signal timing plans, reroutes, changeable message sign information, agency notifications, and much more. In addition, the rules supporting which response plan elements can or should be used at a particular day and time are being determined and entered into the application. For example, a reroute that passes a school may not be a viable option during school hours; or if an incident takes place at 2am versus 2pm, different traffic management centers may need to be notified due to staffing.

Although the very early stages of development, the tool is currently available for download. Interested users should review the installation and use instructions prior to downloading. 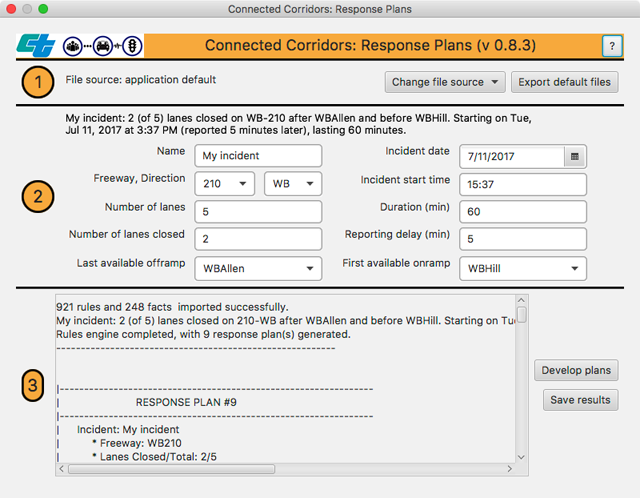 To use the tool, incident information is entered into the user interface including location, date, time, number of lanes and lanes closed, duration, and so forth. Then the tool reviews the response plan elements and rules and uses them to generate response plans. This first version of the tool is being designed as a standalone desktop application. Later on, a very similar tool will be developed within the ICM system. This version of the tool will rank the response plans using rules or a traffic simulation model, and forward the plans for approval and implementation.

In addition to being valuable for the I-210 Project, the response plan generator tool will be made available to other Caltrans Districts and regional agencies for their use. This is a good example of how the Connected Corridors Program is paving the way for simpler ICM implementation across the state of California.

Updated versions will be released as they are tested and used by the team.