Enabling communications between the stakeholder agencies is an essential component of Connected Corridors. Field data regarding road conditions, status of the signals, and much more, need to be communicated to the data hub and Decision Support System. Response plans will be generated and approved based on that field data and then communicated back to the field.

Communications will be implemented in two phases. Phase 1 will be site to site VPNs (Virtual Private Network) between Caltrans’ TMC serves and the city and county stakeholders. The County manages Duarte’s and Monrovia’s data, so there are three separate connections and center to center interfaces. The data will be transmitted to Caltrans Amazon Cloud (AWS) and will include traffic data only. The simplified diagram below shows the two phases of the communications network for the I-210 Pilot. 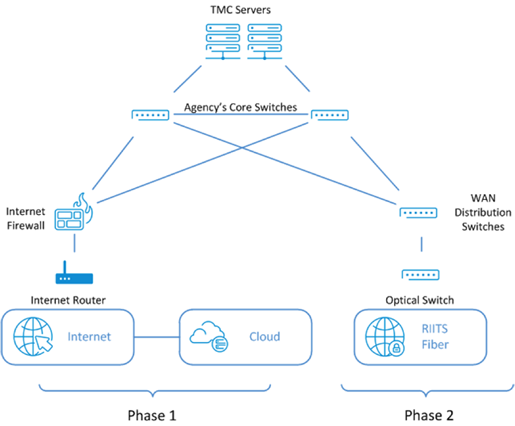 At the end of April 2018, the first of the three VPN connections was successfully tested. This VPN will connect the City of Arcadia to the entire network and is an important milestone for the Pilot. The City of Pasadena’s VPN is close behind and should be tested and installed in the coming weeks.

Phase 2 will be a 10 GB per second fiber network with 1GB per second bandwith per agency.  The fiber network will enable the transmission of video data, as well as the traffic data transmitted in Phase 1. For Phase 2, the Pilot will be installing the fiber through RIITS (Regional Integration of Intelligent Transportation Systems), LA County’s existing communications network. LA Metro sponsors the RIITS network, which supports the exchange of real-time information between freeway, traffic, transit and emergency service agencies.

In addition to the communications infrastructure, the project team is working with three software vendors to install the appropriate interfaces to allow communications between Caltran’s system and the stakeholders’ traffic signal systems. These are called the Center-to-Center Communications.